Origin of the Santoor

The Santoor most likely originated in Persia. The Persian word, Santoor, is said to mean a hundred strings. It is believed that traveling musicians spread the Santoor across Europe and Asia. Instruments of the santoor style are known from Turkey, China, Greece, Germany, and Hungary among other countries. The Indian Santoor is the oldest known string instrument of India. While it had originally been part of the classical music in Persia, it was a highland folk instrument in India. During the Vedic period the strings were made of dried grass, these were later replaced by gut strings and today the Santoor has metal strings.

Description of the Santoor

The Indian Santoor is a flat shaped instrument in the form of a trapezoid. The wider side, and therefore longer strings, has the bass notes. The narrow side, with shorter strings, has the high pitched notes. The strings are arranged in courses. Each course has three strings. String tuning pegs are found on the right side of the santoor. There is one tuning peg for each string. This allows each string to be tuned individually; although, all 3 strings in one course are usually tuned to the same note. The courses run over movable wooden bridges. The Bridges do not run down the middle of the soundboard; rather, they alternate left-right-left-right down the soundboard. Because of this the courses’ playing surfaces are raised, alternately right-left down the soundboard. These raised playing surfaces are struck or stroked with light wooden hammers.

The Indian Santoor is usually played while seated, with the instrument in front of you. It can also be played while standing if it is placed on a dulcimer stand (sold separately). While playing, the wide side is closer to the player and the shorter side is pointed away. Both hands are used to play the strings. The strings can be gently hammered, or stroked. With skill and practice one can glide the strikers on the strings. The tones will differ depending on where the strings are played. The tone closer to the bridges is different than when played away from bridges. Another variation to the hammered play is to have the palm of one hand muffle the playing of the hammer in the other hand. 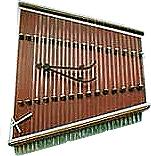