Origin of the Harmonium

The British introduced harmoniums to India during the colonial period. They were quickly adopted by the India cultures. It is more popular in the north than in the south of India. The original harmoniums brought to India were of two basic types, those with a hand bellows and those with a foot pump. While a foot pump might make more sense to the Western musician it has draw back for the Eastern musician. Most significant is that a foot pump requires that the harmonium be placed up on a table and the musician seated in a chair. Indian music is traditionally played from a position seated on the floor. For the Western musician the foot pump allows the instrument to be played with two hands, one for melody one for the chords. There are no chords in Indian music and so overall the foot pump became a liability, not an advantage.

Description of the Harmonium

Harmoniums are in the family of free-reed aerophones. Harmoniums resemble small, tabletop size, organs. Each harmonium has a bellows at the back that is pumped by one hand while the other hand plays the keyboard. Inside they contain multiple chambers. There are different banks of free reeds in each chamber. The size and shape of each reed in the bank determines its pitch. Engaging Stops directs the airflow to various chambers. Each playing Key and each Drone controls the air through one or multiple reeds within a chamber. When engaged, Drones provide a continual harmony note and are played in unison with the keyboard.

Parts of the Harmonium

Stops (main) – Usually the top knobs on the front of the instrument. These Stops control the airflow to the various banks of reeds. Each chamber will have at least one stop, although there can be multiple stops for a chamber. Multiple stops may simply allow more air to a chamber for a more powerful sound, or they may control special functions, such as tremolo.

Stops (drone) - The drone strops are usually the knobs on the bottom of the front of the instrument. Drones control the airflow over fixed reeds that have no keys. When engaged they provide a continual drone of a harmony note.

Reeds - The reeds are a thin brass tongue set into the opening of a thicker brass base. Each base is roughly 1/4 inch by 2 inches. The thin tongue vibrates when air passes through the opening. Small thin reeds have a higher pitch than wider longer thicker reeds.

Coupler - This relatively simple device physically connects, or couples, two keys. The result is that playing one key engages two reeds simultaneously. One key will play two reeds that are one octave apart. The coupler may be engaged or disengaged by the user.

The most common playing position is to place the harmonium on the floor and sit, cross-legged, in front of it. You can play the keys with your dominant hand while your other hand works the bellows, but most often the right hand plays the keys. Most exercises are written for the right hand. You can also place the harmonium on a table and sit in a chair while you play. Find a comfortable pose. Practice you scales as you would with an organ or piano. Find an instructor from our links page to help you learn the Ragas.

The harmonium has a number of delicate parts that are made of cloth or leather. These restrict and maintain the air within chambers and the bellows. These parts are usually held in place with water soluble glues. It is important not to expose your harmonium to extremes in temperature or moisture. Avoid pumping the bellows with all the stops pushed in; this will cause greater pressure in the chambers than the delicate parts can handle and may lead to leaks. Be very careful around curious children. If you have ever heard a parent tell you they had to replace the VCR because there was a peanut butter and jelly sandwich stuck in to the tape slot- well there are a number vents, and holes on the harmonium that are perfect for small fingers, pencils, etc. Any holes in the bellows, or cloth vent covers will cause air leaks in the chambers and your harmonium will need repair.

The instrument itself is hand crafted of wood, which will also react to the changes in moisture and temperature. Changes in the wooden parts can cause the reeds to buzz. Sometimes simply playing a reed over and over will eliminate the buzz. If that does not work you may whish to try loosening the screws on the reed, lifting the reed slightly and then re-tightening it. Any small bit of debris in a reed will also cause it to buzz. Clean them carefully, reeds can be easily bent and then they may not work, or the note can be altered. 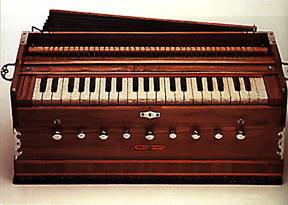