Compared to the other brass instruments commonly found in the orchestra, the typical range of the french horn is set an octave higher in its harmonic series, facilitated by its small, deep mouthpiece, giving it its characteristic "mellow" tone.

The original French Horns were much simpler than current horns, which consist of complicated tubing and a set of 3 to 5 valves (depending on the type of horn). These early horns were simply brass tubing wound a few times and flared into a larger opening at the end (called the bell of the horn). They evolved from the early hunting horns and, as such, were meant to be played while riding on a horse. The hornist would grip the horn on the piping near the mouthpiece and rest the body of the horn across his arm so that only one hand was needed to play and the other could be free to guide his steed. The only way to change the pitch was to use the natural harmonics of that particular length of tubing by changing the speed at which the lips vibrated against the mouthpiece.

Later, horns became interesting to composers, and were used to invoke an out-of-doors feeling and the idea of the chase. Even in the time of Wolfgang Amadeus Mozart, however, the horn player (now a part of the early orchestra) still had a much simpler version of the horn; he carried with him a set of crooks, which were curved pieces of tube of different length which could be used to change the length of the horn by removing part of the tubing and inserting a different length piece. The player now held the horn with both hands, holding the tubing near the mouthpiece with one, and putting the other into the bell, which was either rested upon the right knee of the player or the entire horn was lifted into the air. Now the pitch played could be changed in several ways. First the player could change the harmonic series which the instrument as a whole had by removing and inserting different sized crooks into the instrument, changing the length of the horn itself. Less globally, given a particular crook, the vibration of the lips could be varied in speed, thus moving to a different pitch on the given harmonic series. Finally, now that the player had his hand in the bell, the hand became an extension on the length of the horn, and by closing and opening the space available for air to leave the bell, he could bend the pitch to interpolate between the elements of a harmonic series. This interpolation finally made the horn a true melodic instrument, not simply limited to a harmonic series, and some of the great composers started to write concerti for this new instrument. The Mozart Horn Concerti, for example, were written for this type of horn, called the natural horn in the modern literature.

Around 1815, the horn took on new form, as valves were introduced, which allowed the player to switch between crooks without the effort of manually removing one from the horn and inserting a new one. At this same time, the standard horn came to be the horn on the F harmonic series, and there were then three valves added to it. Using these three valves, the player could play all the notes reachable in the horn's range. 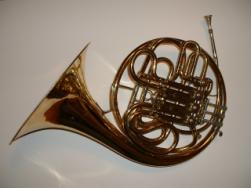 The single F horn, despite this improvement, had a rather irksome flaw. As the player played higher and higher notes, the distinctions a player had to make with his or her embouchure from note to note became increasingly precise. An early solution was simply to use a horn of higher pitch -- usually B-flat. The relative merits of F versus B-flat were a hotbed of debate between horn players of the late nineteenth century, until the German horn maker Kruspe produced a prototype of the "double horn" in 1897.

The double horn combines two instruments into one frame: the original horn in F, and a second, higher horn keyed in B-flat. By using a fourth valve operated by the thumb, the horn player can quickly switch from the deep, warm tones of the F horn to the higher, brighter tones of the B-flat horn (commonly called "sides"). In the words of Reginald Morley-Pegge, the invention of the double horn "revolutionized horn playing technique almost as much as did the invention of the valve." [Morley-Pegge, "Orchestral," 195]

The most common is the descant horn, which is a single horn pitched in F alto, one octave higher than the traditional F horn. The descant is used largely for extended playing in the high register, such as in Bach's Brandenburg Concerti. Single horns in F or B-flat still see use, notably in operatic settings. Their lighter weight renders them much more suitable for the extended and strenuous playing required of Wagnerian operas.

The triple horn is the result of merging an F/B-flat double horn with an F-alto descant, adding a fifth valve to an already complex instrument. While the horn is suitable for work in nearly every register of horn literature, the added weight makes it tiresome to play, and for this reason it is not widely used.

The mellophone is, in appearance, very different from any of the above types of horn, but it is nevertheless used in place of the horn in marching bands.