Bagpipes are a class of musical instrument. The term is equally correct in the singular or plural, although pipers most commonly talk of "pipes" and "the bagpipe".

The bagpipes consist of an airtight bag, which can supply a continuous stream of air. Air is supplied either by a set of bellows or by a blowpipe; the inlet to the bag has a one-way valve which prevents air from returning via the supply. Every bagpipe has a chanter, upon which the melody is played, and most have at least one drone, although there are a few (relatively) important exceptions to this rule. All these pipes are attatched to the bag by a stock, a small, usually wooden, cylinder which is tied into the bag and which the pipe itself plugs into. The bag usually consists of leather, but in more recent times many other materials, such as rubber and goretex have become popular amongst many pipers, particularly Highland pipers. 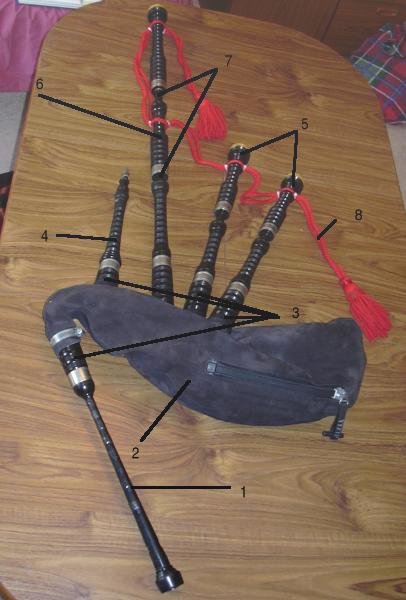 The history of the bagpipe is very unclear, and worse, many of the secondary sources from the nineteenth and early twentieth sources are misleading or verging on fantasy (the works of Grattan Flood are particularly bad in this respect, but continue to be quoted and referenced to the present day). For example, an oft-repeated claim is that the Great Highland Bagpipe was banned after the '45 rebellion. This claim is untrue; there is no mention of the bagpipe in the Disarming Act, and the entire myth seems to stem from the letterpress of Donald MacDonald's Martial Music of Caledonia, written by an unknown Romantic. However, it seems likely they were first invented in pre-Christian times. Nero is generally accepted to have been a player; there are Greek depictions of pipers, and the Roman legions are thought to have marched to bagpipes.

Where they were first introduced to Britain and Ireland is debatable, though Ireland has references going back to the Dark Ages (though none of her traditional legends mention pipes). An explosion of popularity seems to have occurred from around the year 1000; the tune used by Robert_Burns for "Scots Wha Hae", "Hey Tutti Taiti", is traditionally said to have been the tune played as Robert the Bruce's troops marched to Bannockburn in 1314.

There are many kinds of bagpipes; the following is an overview of some of the most common:

Probably the most well known are the piob mhor or Great Highland Bagpipes (commonly abbreviated GHBs), which were developed in Scotland. The picture above shows a set of Great Highland Bagpipes. A set has two tenor drones (an octave below the fundamental of the chanter), one bass drone (an octave below the tenor), a blowpipe and a chanter pitched in B flat with a mixolydian scale (usually referred to and always written as A). This type of bagpipe is widely used by both soloists and pipe bands (civilian and military), and are now played in countries around the world, particularly countries with strong colonial or emigrant associations, most particularly Canada, America, Australia, New Zealand, and South Africa. Additionally, Pollig Monjarret introduced the GHB to Brittany to revive the moribund Breton folk music scene, inventing the bagad, a pipe band incorporating the GHB, the Scottish pipe band drum section, the bombarde and latterly almost any instruments, from model elephants, which one of the most famous is the Bagad Kemper to small jazz orchestras. In Brittany, GHB is called Biniou Brahz, aka Great Biniou, references the Biniou, the traditionnal pipe of this country.

The next most common type is the Irish or Uilleann (pronounced illin) bagpipe; this vies with the Northumbrian smallpipe for the title of most developed bagpipe in existence. This bellows-blown pipe plays a two octave diatonic scale in D major. The second octave is produced by overblowing, and extra keys and/or cross-fingering can be used to produce other tones than those in a diatonic D major scale. The most commonly added keys are a C natural, a G sharp, and an F natural key. Although the chanter does not have a completely closed end, like the Northumbrian smallpipes, the player can press the end of the chanter against a leather pad on his/her knee while closing all fingerholes, producing complete silence. Thisis used to play short staccato passages. Nowadays the leather pad is often replaced by an air-tight key at the end of the chanter bore, which makes it easier to close the pipe completely with the knee. The Uilleann pipes also have three drones (although there are a few examples of sets with four drones, these are non-standard), set in a common stock, all tuned to three different octaves of D, and up to three (or in rare cases four) regulators which are effectively a kind of chanter with keys, designed to be played by the wrist. Accomplished players can use these to provide a limited but powerfully impressive chordal accompaniment. Often Uillean pipes are found without any drones or regulators; these sets are called somewhat misleadingly "practice sets". In fact, many pipers use these sets for their entire piping careers. Another common choice is to have only the drones, without regulators. This is known as a half-set. A final occasional variant, the three-quarter set, omits the bass regulator, which is rarely used.

The Northumbrian smallpipe is a bellows-blown pipe which, as noted above, shares the unusual characteristic with the Uilleann pipes of being able to stop the sound of the chanter. This is done by giving the chanter a completely closed end, at the cost of losing the lowest note. This combined with the unusually tight fingering (each note is played by lifting only one finger) means that much Northumbrian piping tends to be very staccato in style. The chanter has a number of keys, most commonly seven, but two-octave chromatic chanters are occasionally seen, which require over twenty keys, all played with the right hand thumb and left hand pinkie! Traditionally, the chanter is pitched in what Northumbrian pipers refer to as F+, a pitch approximately twenty cents sharp of F natural. The music, however, is always written in G. Nowadays, chanters are available anywhere from D to G, G and true F natural being the most popular for playing ensemble. There are usually four drones on the Northumbrian pipes, usually tuned to the tonic or the fourth. Many include a tuning bead, allowing the player to alter the drone's pitch by a whole tone, for playing in different keys.

The Scottish smallpipe is a bellows-blown bagpipe developed from the Northumbrian smallpipe by Colin Ross to be playable according to the Great Highland Bagpipe fingering system. Historical antecedents do exist, but modern designs are not based on these and there is no unbroken line of traditional playing. Most modern players use any comfortable open fingering or are trained GHB players. It has a parallel bored chanter, most commonly pitched in A, although any key is feasible; D, C, and B flat are the next most common keys. They are most commonly unkeyed, but occasionally G sharp, F natural, and C natural keys are added. It is possible to add enough keys to produce a two-octave chromatic scale, but this is rarely done. The present writer cannot think of any prominent piper using such a set. The drones are set in a common stock and are tuned an octave below the tonic, either the fifth or an octave below the fifth (a few players choose to tune this to the fourth instead), and two octaves below the tonic. It is perhaps the youngest bagpipe with any popularity, having only existed since its invention in the early 1980s. It is however extremely popular, particularly with Highland pipers, many of whom keep it or a Border pipe as a second instrument. Mouth-blown versions are available, but it is difficult to produce quality tone from these instruments due to the reed's delicate construction.

The Biniou is a mouth blown bagpipe from Brittany, a region of France. It has a two octave scale, and is very high pitched; its lowest note is the same pitch as the highest on the Great Highland Bagpipe. It has a single drone two octaves below the tonic. Traditionally it was played as a duet with the bombarde, for Breton folk dancing. It is the most famous bagpipe of france, but not the most played.

Derivated from old pipes and rebuilt in the seventies, the modern flemish and center-france bagpipes are the same instrument. Only the drone's position differ between them. here are many schools all over france, and they are actually played during set dancing called "Bal Folk", playing traditional french music.

The Border pipe is a close cousin of the Highland bagpipe, and commonly confused with the Scottish smallpipe, although it is a quite different and much older instrument. With a conical chanter, three drones in a common stock, tuned as per Highland pipes or Scottish smallpipes, this bagpipe combines the Highland pipe tone with the more manageable key of A, and lower volume, suitable for playing in folk bands and at informal folk sessions.

Gaita is the Spanish name for the bagpipe used in Galicia and Asturias. It has a conical chanter with a second octave. Pipe bands playing these instruments have become popular in recent years.

There are literally hundreds of types of bagpipe; what follows is not by any means an exhaustive list.